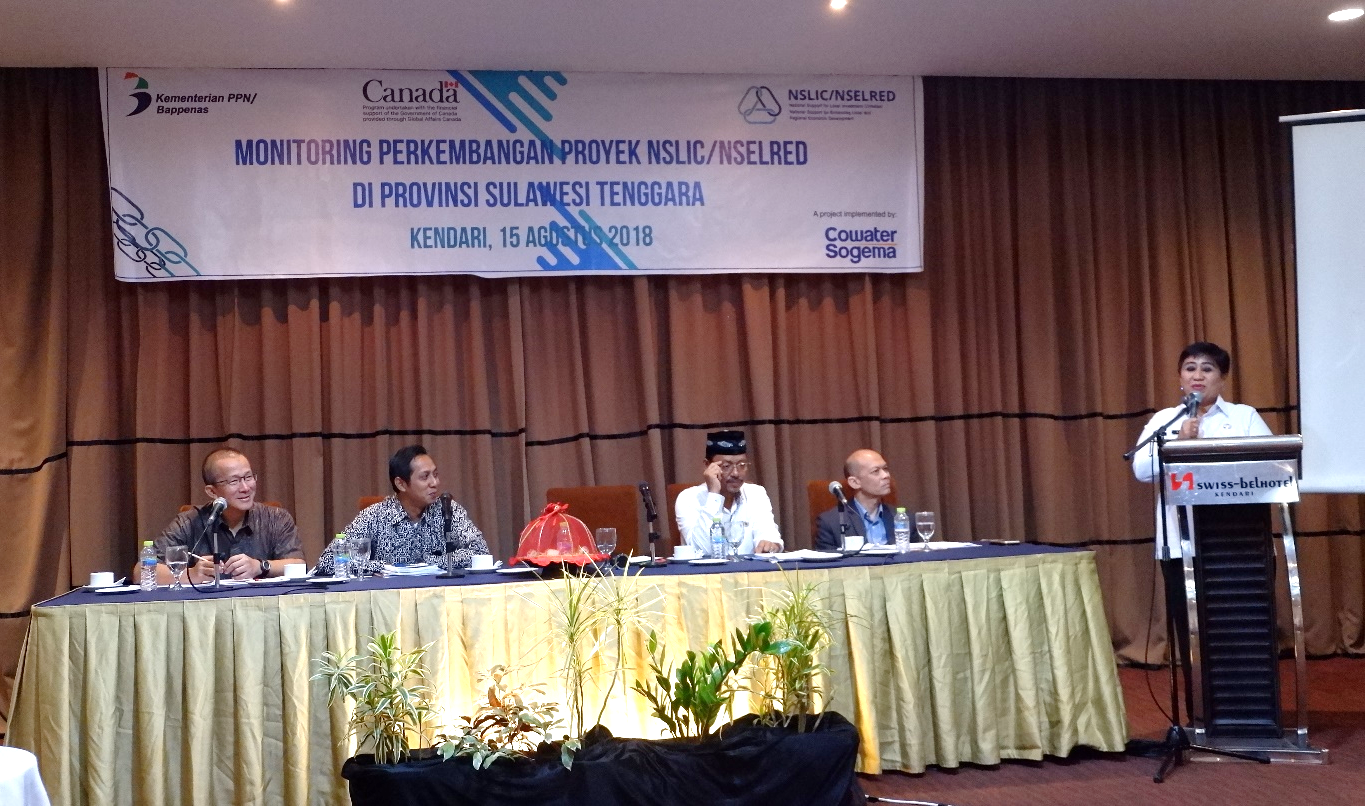 KENDARI. The Government of Canada through Global Affairs Canada (GAC) and the Government of Indonesia through Ministry of National Development Planning/Bappenas conducted a mid-year 2018 fiscal year monitoring activity to evaluate the progress of National Support for Local Investment Climates/National Support for Enhancing Local and Regional Economic Development (NSLIC/NSELRED) Project implemented in Gorontalo and Southeast Sulawesi provinces.

Rino A. Sa’danoer, NSLIC/NSELRED Project Director said, “This 2018 mid-year monitoring is crucial to evaluate the progress and challenges NSLIC/NSELRED faces so far in support of the national and local governments to increase the capacity, local investment climates and regional economic development. We are eager to learn more about both positive outcomes and the bottlenecks of implemented activities during this year’s January to June period. Strong coordination and cooperation are indeed a key prerequisite that we have been encouraged from the national to local level to achieve and sustain the project’s impact.”

The Ministry of National Development Planning/Bappenas’ Sub-directorate Head of Transmigration and Boundary Area at Directorate for Disadvantaged Regions, Transmigration and Rural Development, Arief Wiroyudo said, “As we know, NSLIC/NSELRED project has been implemented since May 2017. We will be happy to see the progress that have been achieved by the project in 2018 compared to the last year. Through this program and tangible pilots, we are full of hope that our partnerships with NSLIC/NSELRED will bring valuable initiatives to enhance the efforts of local and regional economic development.”

Senior Development Officer at Global Affairs Canada (GAC), Jeffrey Ong further added that the mid-year monitoring in Southeast Sulawesi and Gorontalo provinces are aimed to comprehensively measure the project’s outcomes to be evaluated against the indicators. “We support five city/districts in Southeast Sulawesi namely Kendari city and the districts of Bombana, Wakatobi, Baubau and South Konawe as well as five other city/districts in Gorontalo province include Gorontalo city and the districts of Boalemo, Gorontalo, North Gorontalo and Pohuwato. Each city and district implements unique program. We really hope that the initiatives can help to improve investment and employment. By doing so, strengthening the local commodities-based economic and eradicate poverty.”

Meanwhile, Acting Provincial Secretary of Southeast Sulawesi, Isma appreciated NSLIC/NSELRED supports as the program is in line with local and national development plans. “We thank NSLIC/NSELRED for the support. We can see that our partnership through this program can facilitate some of the local economic efforts as it has similar targets that the National Medium‐Term Development Plan or RPJMN 2015-2019 aims to achieve. Particularly, improving the city-village interconnectedness through economic growth centers. Also, increasing employment rate for low-income communities, both women and men, by keep promoting investment climate and local economic development.” said Isma.

Isma also hope that the national government and NSLIC/NSELRED will support more on tackling the local government’s challenges to simplify the regulatory and licensing barriers for SMEs and cooperatives; promoting regional and national cooperation; strengthening national support for local economic development; and increasing access to services for the development of SMEs and cooperatives.

“Two pilot activities of NSLIC/NSELRED in Southeast Sulawesi which have shown positive progress include the development of a Roadmap to reform the One-Stop Integrated Service (PTSP) in Kendari city and the demo plots for cattle rearing in South Konawe district. We really appreciate the NSLIC/NSELRED support for these two initiatives and hope other excellent programs can be implemented together in the near future.” Isma said.