KONAWE SELATAN. Southeast Sulawesi is one of the provinces in Indonesia that was appointed by the national government as beef cattle development areas based on the Minister of Agriculture’s Decree No. 43 of 2015. According to the Directorate General of Animal Husbandry and Animal Health, Ministry of Agriculture of Indonesia, the cattle population in Southeast Sulawesi Province reached 333,184 in 2016 or ranked 12th out of 34 provinces in Indonesia, and the province’s cattle development areas located in Konawe Selatan and Muna districts.

In 2016, Konawe Selatan district regency was re-designated as the area for national Bali cattle seedlings based on the Minister of Agriculture Decree No. 803 of 2016. Based on the Central Agency on Statistics’ data of Southeast Sulawesi province, Konawe Selatan district has the largest population of beef cattle among 17 districts/cities in Southeast Sulawesi, with a total of 65,434 beef cattle. The meat production of Konawe Selatan ranks second in the province at 752,913 kg per year.

However, the results of an economic study conducted in 2017 by NSLIC/NSELRED and Haluoleo University of southeast Sulawesi showed that the productivity of cattle in Konawe Selatan was still relatively low. One of the main reasons is the low rate of average daily gain (ADG) of cows that has not been maximized because the cattle breeding system carried out by the local cattle rearers is still conducted through semi-intensive method and has not used additional concentrate feed to increase the weight of cattle. The results of this study then suggested the need for project interventions to improve cattle rearing systems and increase the productivity of cattle through fattening and using additional concentrate feed. 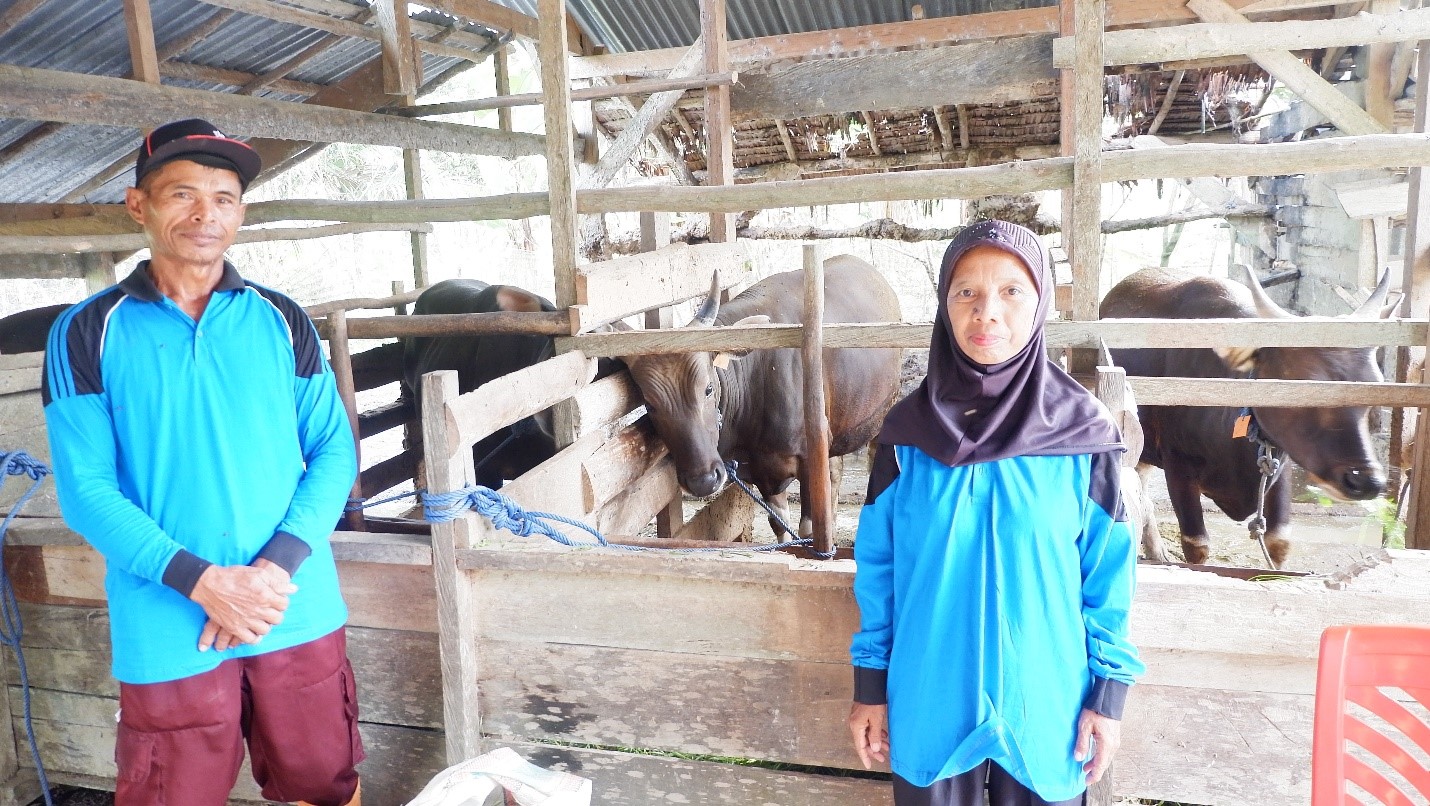 As a follow-up as well as pilot project, NSLIC/NSELRED collaborates with the provincial government of Southeast Sulawesi, district government of Konawe Selatan and Haluoleo University provided technical supports for the development of cattle farms in Konawe Selatan. Throughout May to August 2018, a series of training on concentrate feed management, feeding procedures and composition and the creation of cattle fattening demonstration plots was conducted in two villages of Alebo and Morome of Konda sub-district involving five households consisting of five male and four female cattle rearers with a total of 20 Balinese cows aged 1.5 to two years.

When the pilot project begin, all cattle were measured using a digital scale to determine their initial weight. Measuring then has been carried out regularly every two weeks to monitor the development of cattle’s average daily gain (ADG). Farmers involved in this pilot activities are trained in how to process local feed and use concentrates. Fattening cattle were fed with natural grass and cultivated grass such as Napier grass (Pennisetum purpureum), plus concentrate feed. Feeding based on dry matter requirements is 3% of body weight, with the proportion of 60% obtained from grass and 40% from concentrate. All fattened cows were also given IVOMEC at a dose of 1cc/50kg of body weight to combat any types of parasites.

The cattle fattening program has a positive impact on helping to increase the local cattle rearers’ income. Kaswin (61) and his wife, Sumiyati (58), from Alebo village of Konda sub-district in Konawe Selatan District are two out of 19 local cattle rearers participated on NSLIC/NSELRED-supported feed management training and fattening demoplot program. “We have five cows. After using concentrate feed from May 20 to August 19, 2018, our cattle with an initial weight of 225 kg increased to 280 kg with a selling price of IDR 11.5 million per cow. The duration of cattle rearing was also shorter, only 100 days. Before this training and demoplot, we used to sell a cow with 260 kg of weight only for IDR 10.5 million and the duration of cattle rearing was longer, around 150 days.” Kaswin said.

Kaswin has been raising cattle for 30 years. He was motivated to join the NSLIC/NSELRED cattle fattening training and demo plot program because he wanted to learn the new method of cattle fattening after trying several tricks for the last 15 years. “All this time, I have been raising cows in a traditional way. Before taking part in the training and demo plot program, I used to feed my cattle with field grass, Napier grass (Pennisetum purpureum), gamal leaves and rice bran. I feed cows every time from morning to night and there is no feeding measure. But after participating the training and demo plot, now I know how to manage cattle feed in accordance with the correct procedures, including how to use concentrates. I also never measure the cattle’s weight before. To know that there was an increase in their weight, we only estimated the number. However, through this training and demo plot activities, we were also involved to regularly measure the cattle’s weight so we know exactly how much the weight of the cow that has been increase from time to time. If I can compare it before and after demo plot, cows that are given concentrate increase their weight faster than those who are only given regular food. Their physical appearance is also different, the cow’s skin that ate concentrate is smoother.” added Kaswin.

Based on the results of a demo plot and cattle fattening pilot for three months, it was recommended that the cattle rearers who plan to develop a cattle fattening business are advised to choose a cow with minimum weight of 200 kg because the increase in weight will be faster than going to cow which weight under 200 kg. Professor Takdir Saili from Haluoleo University, one of the trainers for this pilot said, “The demo plot results in Konawe Selatan suggested that by adjusting the scales of each cow with its initial weight, cattle treatment (with concentrates) has higher increase in body weight of 7.7% compared to the cows without concentrates, their weight difference reached 15.3 kg. Selection of a minimum body weight of 200 kg will also affect the maintenance period and production costs incurred by the cattle rearers.

To replicate the pilot program and expand the positive impact of the cattle fattening and demo plot activities, NSLIC/NSELRED will involve other 45 cattle rearers in three sub-districts of Konda, Landono and Mowila from September 2018 to March 2019. It is targeted that the income of cattle rearers will increase by around 18% with optimal cattle weight reaches 290 kg, thus the selling price rises to IDR 11.6 million per cow. In addition, NSLIC/NSELRED will also provide training in producing organic fertilizer from cattle farm waste for agriculture, facilitate the development of provincial and district regulations and create access to market.