NORTH GORONTALO. The President of the Republic of Indonesia, Joko Widodo during his visit to Gorontalo province on March 1, 2019 conducted a corn harvest in North Gorontalo district. The total area of land harvested is 1,392 Ha located in Botuwombato village of Kwandang sub-district and Motilango village of Tibawa sub-district. North Gorontalo district is one of the province’s main sites for the corn cultivation with a total land ready for harvest in Kwandang sub-district which consists of 15 villages and Tibawa sub-districts which consists of seven villages covering 5,695 hectares.

Accompanied by the Minister of Agriculture, Andi Amran Sulaiman and Gorontalo Governor, Rusli Habibie, President Joko Widodo (also known as Jokowi) and the First Lady, Iriana met the farmers and locals before watching the corn harvest using Combain machines which is capable of harvesting one hectare of corn per three hours. The President also handed over corn seed to six farmers’ representatives. During a dialogue with the community, President Jokowi emphasized that the government seriously aims to spur national corn production and increase the price of corn commodities. “If there is excess in national corn production, we will have some supply for export so that the corn domestic price remains stable. This eventually will also benefit farmers. Several years ago, many farmers complained to me that the corn price was very low. We immediately examined the cause, then issued a Presidential Regulation to support the increase in corn commodity prices.” Jokowi said. 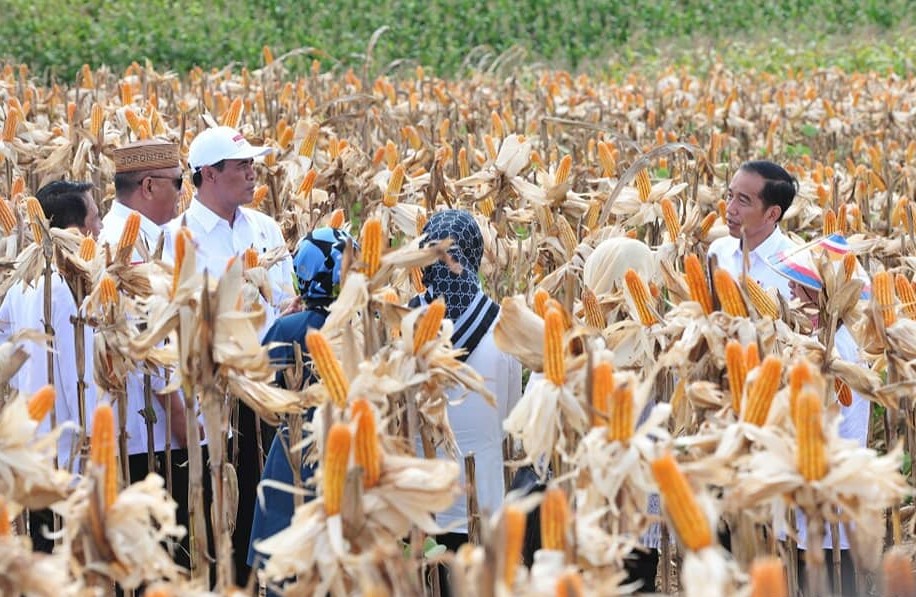 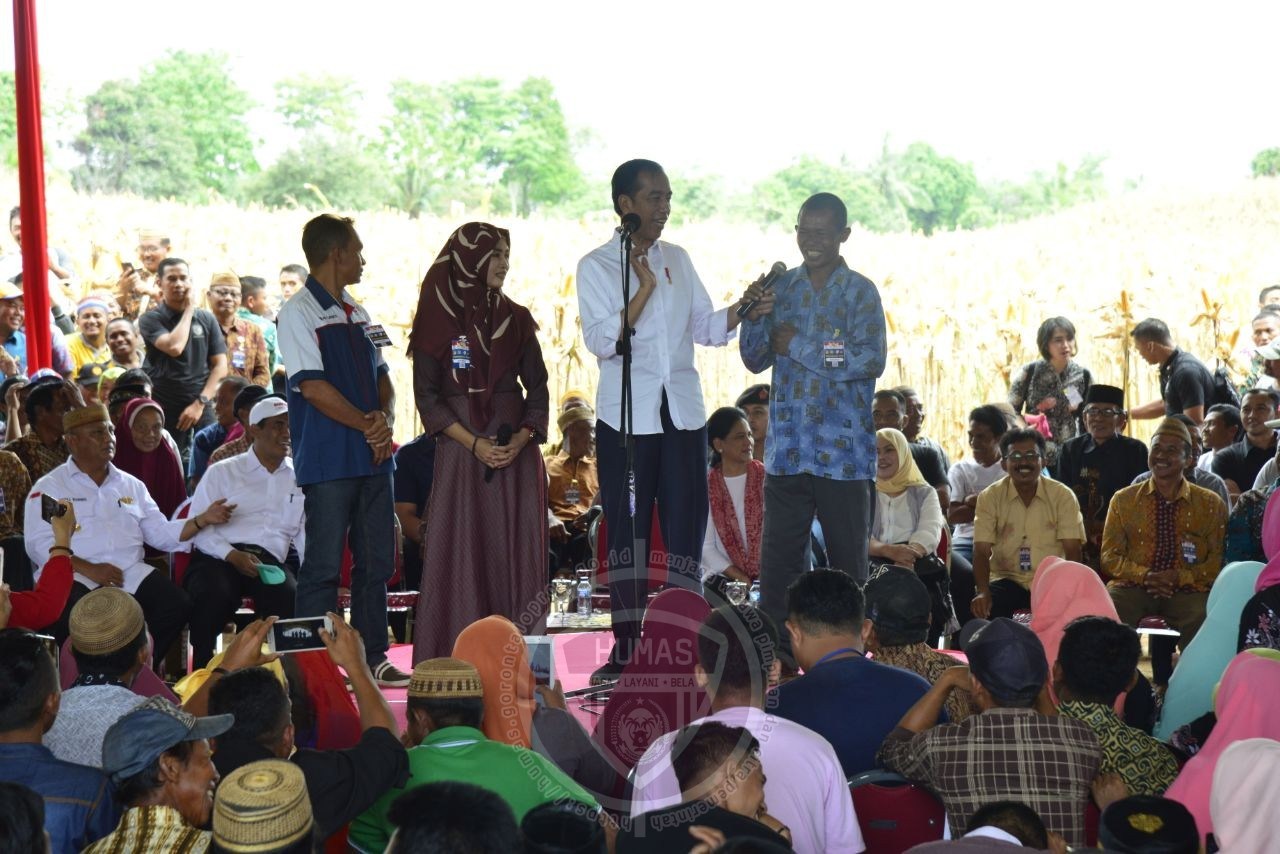 The minimum price of dried corn set by the national government is IDR 3,150 per kilogram. By the end of February 2019, the price of dried corn for poultry feed on the market with water content below 17% ranged from IDR 3,200 to 3,800 per kg. The minimum pricing is to ensure the welfare of farmers, poultry breeders and the community. President Jokowi also said that the government continues to monitor the corn price because if it is too high it will impact on the prices of animal feed, livestock, poultry meat and eggs generally consumed by the community.

The Governor of Gorontalo province, Rusli Habibie said that the national government was very serious in encouraging the increase of Gorontalo corn production and he is ready to support achieving the target. This year, Gorontalo province received allocation of corn seed and fertilizer assistance for 150,000 hectares from the national government through the Ministry of Agriculture. As a follow-up, the Gorontalo provincial government has opened new lands for corn farming and carried out data collection on farmers in five districts to be involved on the program. The provincial government has also distributed assistance of 10 units of corn dryer machines with a capacity of 6 tons per hour. They also provided warehouses, drying floors and tarpaulins to be utilized by corn farmers in order to increase the quality of dried corn so that the farmers can get better selling price. 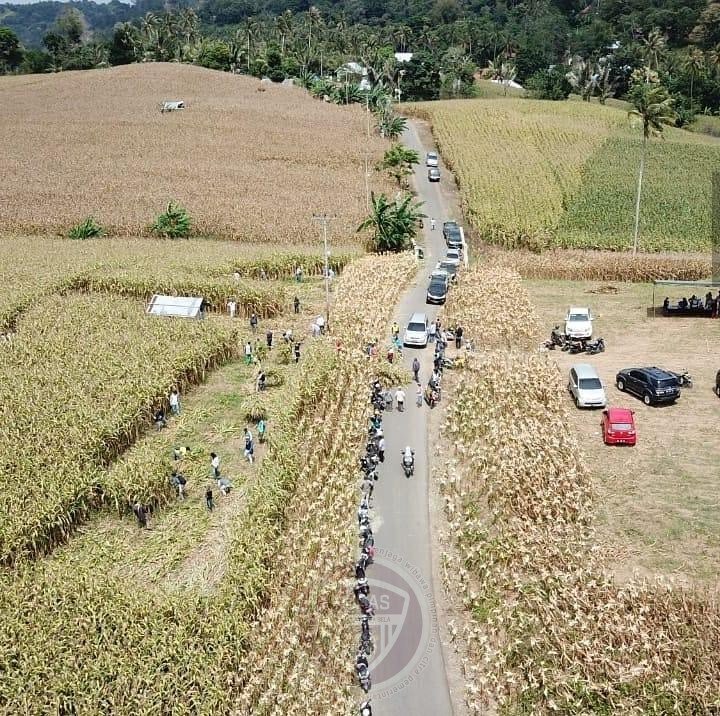 As a pilot for the implementation of Good Agricultural Practices (GAP) and postharvest handling for corn, NSLIC/NSELRED collaborates with the Government of Gorontalo Province to provide technical supports and capacity building for farmer groups and corn business providers. The result of a 2-hectares of corn demonstration plot supported by NSLIC/NSELRED and local government in Botuwombato village of Kwandang sub-district, North Gorontalo district showed significant progress and helped to increase the income of corn farmers. This successful pilot was appreciated by the Provincial Government of Gorontalo through the appointment of Botuwombato village as one out of two locations for the corn harvest during President Jokowi visit to Gorontalo Province on March 1, 2019.

The head of Botuwombato village, Mahmud Mulyadi (39) is very proud of this achievement. Mulyadi who is also the chairman of a farmers group with 21 members actively develop their capacity and knowledge through various technical training facilitated by NSLIC/NSELRED and the local government. “We really feel the benefits of the technical assisstances provided by NSLIC/NSELRED and the local government to help increasing our corn productivity and eventually our income. A recent visit of President Joko Widodo, Minister of Agriculture, Andi Amran Sulaiman and the Governor of Gorontalo, Rusli Habibie to meet us and conduct a corn harvest in Botuwombato village is truly a surprise and quite a motivation booster. Moreover, Mr. President and the officials also visited our corn demo plot. It is indeed a great pride for us,” said Mulyadi.

Mulyadi believes that the application of GAP and post-harvest handling can increase corn productivity. “After applying the knowledge we gained from training in land management, superior seeds, fertilization technique and postharvest handling, which was facilitated by NSLIC/NSELRED with local government, my corn demo plot which initially only produced 6-7 tons per hectare now can produce 9.3 tons per hectare. Calculated from the current result of my two hectares corn demo plot (minus the production costs), my net income increases from around IDR 2 to 2.5 million to IDR 4 million per month,” Mulyadi explained.

To expand the successful result of the corn plot demo, NSLIC/NSELRED and the Government of North Gorontalo district continue to support 26 local farmer groups to implement the GAP and postharvest handling. Seeing the significant result of the corn demo plot nurtured since September 2018 as part of technical trainings, around 40 corn farmers in North Gorontalo district are now starting to replicate the knowledge and practices they obtained from the training on their corn plots.

“After knowing the results, many farmer groups wanted to learn from my corn demo plot. I am happy if we can learn together, exchange experiences and knowledge so that there will be more farmers can benefit. I always remind my fellow farmers that post-harvest handling is as much important as the cultivation techniques. With corn moisture content below 17%, the price of dried corn on the market can reach IDR 3,800 per kilogram. The better the quality of the corn yield, the higher the selling price we can get. We also hope to support the government’s program to make Gorontalo Province one of the national corn main producers and increase the corn export,” Mulyadi concluded.